Is there hope 2 years after the implementation of the Homelessness Reduction Act? 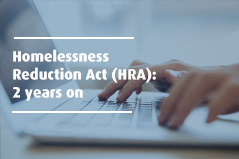 The Homelessness Reduction Act (HRA) 2017 came into effect on 3rd April 2018. Its vision: to transform the way Local Housing Authority (LHA) services are provided to homeless people. It was considered by many to be the biggest change in homelessness legislation since 1977. It not only imposed a duty to prevent and relieve homelessness and other provisions, but also brought potential for cultural and systemic change.

Ian Swift at London Borough of Southwark remarked, “No longer are we asking people to jump through 5 hoops before we can help them... The local authority now has to look for a solution, rather than for a point at which to say no”.

Two years into the implementation of HRA and Crisis, a UK national charity for homeless people, released a report on 10th March 2020, reviewing the act’s effectiveness. They based their findings on 984 surveys and 89 in-depth interviews across 6 local authority areas. On the positive side, the report highlighted that the act expanded access to homelessness assistance and that improved user experience when first approaching Housing Options for assistance. However, the lack of affordable housing in both social and PRS means that local authorities are increasingly constrained in the realistic outcomes that they can achieve, reducing the effectiveness of the HRA.

The problems that councils have had in complying with HRA was explored in a highly insightful report by the Ombudsman. This research, conducted before COVID-19, was based on their first 50 detailed investigations into complaints about the operation of HRA.

The report highlights the areas that service-users have had negative experiences in, including delays in finding suitable accommodation and poor communication issues. It also mentioned poor practice by some councils, who have simply failed to follow set procedures, especially regarding Personal Housing Plans (PHPs).

In response, the Local Government Association (LGA) stressed how councils have been hampered by a lack of funding. A survey from 2019 found that more than two-thirds of councils in England believed they did not have sufficient funding to fulfil the legislation requirements.

It is evident that HRA’s laudable aims to reduce homelessness will be undermined if councils are underfunded and overwhelmed by the extra workload from assessments, administration, reviews, appeals and reporting.

This is why, for over two years, Home Connections has been working tirelessly with local authorities around the UK to ensure our HRA software, hope, is as intelligent as possible. It replaces convoluted processes with a highly specialised, integrated system that is refreshingly intuitive.

Karen McGreal from Arun District Council said: “The implementation of hope was smooth and effective and brought the team some significant benefits, in particular the ease and speed at which PHP’s can be produced”.

“The Housing Options Team like the case notes and documents being captured in one place for ease of reference. The team dashboard is an efficient tool in providing the Team Leaders with an instant overview of the casework across the team. We know we are able to rely on the software to deliver the data for these returns and that offers a vastly improved efficiency for us”, she adds.

We are also extremely proud to be the only software provider that offers the integration between software and service: hope can be integrated to Homefinder UK, the only national mobility scheme to offer a dedicated and unique case management service that helps applicants throughout the bureaucratic social housing process to obtain a new home. Homefinder UK has helped nearly 700 households to find permanent social housing and was recently shortlisted for the UK Housing Awards 2020 in the “Innovation of the Year – Tenant services” category.